Part II. Schools of Thought in
Agreement and Controversy

1. Schools of Thought on Climate Change
2. A Climate Elephant in the Room
3. A 30 Billion Ton CO2 Elephant
4. A Historian on Empirical Climate Change
5. The Right Direction: Methane vs. CO2
6. Consensus of Scientists: Man-made or Natural
7. Governments and Conventions: Failed
8. Timetables for Doom and Gloom
9. To Skip the Doom and Gloom:
Technology and Radical Behavior Change
10. Global Warming Theory: Solid or Shaky
11. Global Warming always Precedes an Ice Age
12. Global Cooling Theory
13. Cycles of Global Cooling
14. Sunspots and Cosmic Rays – A New Theory
15. Opposing Views on Sea Level Rising?
16. Misconception about Rising Sea Levels
17. Is Antarctica Melting or Cooling?
18. The 91 New Volcanoes Discovered
underneath the Antarctic Ice
19. What about Droughts, Floods,
El Nino, and Heat Waves?
20. Agriculture: Plant-based vs Meat-based diets
21. The Mysterious Factor is not CO2?
22. Problems with Computer Climate Models
23. Does the IPCC have a Political Agenda?
24. The NIPCC versus the IPCC
25. Geoengineering, Avoiding the Real Issues
26. Climate Money and Religious Fervor
27. The Precautionary Principle

28. Mother Earth is a Living Organism
29. Mother Earth Warming & Cooling Theory
30. Technology and the “Global Mind”
31. The Holistic Perspective of
Climate Purification
32. War and Bad Global Warming is Sin
33. Global Civilization at Risk
34. A Jewish Plea for a Sustainable Path
35. Inculturation of the Holistic Image of
Climate Purification
36. Mary Mother of Jesus and a Plant-based Diet
Purifying the Environment
37. The Third Secret of Fatima: a Nuclear WWIII
38. The Vatican Intervention for Climate Change
Epilogue:

Introduction – The Scientific Facts and Schools of Thought for Impacting Global Warming! Part I

The most important thing for people is their health and after this is the environment which they live in, because a persons’ health is partly a product of their environment.
Yet most people do not realize how serious this global warming situation really is in the long term. This crisis is the most serious crisis that the human race has ever faced in the history of civilization, one that if not solved will destroy or alter in a bad way human civilization as we know it. These two books are dealing with this topic.

This first section in book I deals with the facts of climate change and global warming. These are hard cold facts, that are not disputed, they are happening now on this earth. There are some variances on the numbers and time scales for some of them, but they are facts. Second this book deals with the schools of thought on these facts. They come to different conclusions on some of the data and facts but all of them agree that the facts are real, not imaginary it’s the methodology and conclusions that differ. The third section in this book looks at different holistic perspectives, or schools of thought on the whole event that is taking place on Mother Earth. There are causes beyond the scientific.

The second book deals with the politics and sources of renewable energy and the commissions that can help deal with the environment, health and climate change, with the present administration in the White House. Having established the facts and some Schools of Thought in book one, this second book looks into policy decisions such as purifying coal plant smoke stacks to near zero emissions, instead of closing them down. It looks at renewable energy such as; wave, solar, hydro, geothermal, farm methane digesters, smart grids and others. It suggests 22 commissions and committees that need to be created to deal with this Trio: environment, health and climate, in a holistic fashion.

The second book deals with the Paris Climate Accord. If President Donald Trump did not reject the Paris Climate Accord and followed along with everyone else, for the next 25 to 30 years, they would have become stuck in this comfortable armchair climate change politics that the world is stuck in now. The U.S. is a world leader and needs to go the next step for our country and for leading the rest of the world out of this terrible situation Mother Earth is caught in. If the world does not turn towards a plant-based diet it will be impossible to solve climate change, this book helps to show some of the facts and schools of thought on this.

Most of the experts have said that wars will come from climate change and wars already have started. In the heat wave of 2010, the Russian government placed an embargo on grain exports, which caused chaos in the commodities markets, an unprecedented food price spike, and, consequently, food riots across Asia and Africa – unrest that led to the violence of what we now refer to as the “Arab Spring.” Besides all the devastating effects of climate change itself, more wars over food and land will come as climate change grows.

In a simple structure climate change can be divided into three areas; industrial pollution, transportation pollution and agricultural pollution. This book deals with all three but especially the agricultural and food section. People are choosing to eat animals (70 billion every year, other estimates are higher) and cattle give off huge amount of methane which is 86 times more potent then CO2. This is carbon footprint which is about 30% greenhouse gases (GHG). The choice for a person to eat meat and animal products for a whole year has larger green-house gas emissions, then all their transportation uses (cars, buses, airlines) put together for that year. One thing that everyone has in common and can change is their diet. Even if all the people on earth cut out most animal products and only ate these three days a week, then eating small portions of meat as a condiment that is essentially cutting down global warming, and solving climate change is possible. This is a good place to start and it doesn’t cost anything!

Radical behavior change, along with technology is needed in order to impact Global Warming.

Thank you for taking the time to read this book. Hopefully it is an inspiration for you to change!

Sincerely in the Hearts of Jesus and Mary,
James C. Tibbetts 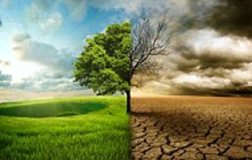