⦁ STL (1995, Licentiate in Sacred Theology) with a specialization in Marian Studies, from the International Marian Research Institute, University of Dayton, Ohio

He has been involved in; Feature Film Promotions, Blue Army of
Washington, NJ for the Fatima film: “A State of Emergency!” (Martin Sheen)
He has worked with the developmentally disabled as a direct care
provider and residential counselor for consumers with physical, developmental,
and mental disabilities in several agencies.

He is a member of Secular Franciscan Order, the K of C and the American Mariological Society. As a theologian he has given talks at national conferences, society meetings and given retreats on; Spirituality, Marian topics; on plant-based diets, fasting, healing and Christian meditation. He has been into a plant-based diet since 1976; also, vegan, raw vegan (2000) and juice fasting, and has written books on these topics and on Biblical Nutrition. He is still a vegetarian-vegan-raw vegan. Jim produced several DVD’s on spiritual topics and mime.

From 1978 Jim has been a professional mime; solo, duet and was a founding member (1991 to 2000) of the group “Christsong” (on the life of Christ) which performed around the U.S., twice-toured England and appeared on local and national television shows. “Tibbetts has studied his art under technique-oriented Marcel Marceau and personality-oriented Tony Montanaro. The result has been a critically acclaimed combination of the two.” (Arts & Entertainment, Evening Express, Portland, ME.)

Jim belongs to the Mariological Society of America (1990’s), Knights of Columbus (1980’s) and Third Order Franciscans (SFO, 1982). He has studied yoga and was also certified as a Pilates Instructor. Jim created Rosary Stretching (or called Rosary Yoga, 2009; includes stretching, Pilates, yoga); and he led a Rosary Stretching group at a church for a year (2016). He also studied meditation and practices and teaches Christian Meditation. He gives talks and retreats and has produced Christian and commercial videos.

Jim has written over 50 books, mostly on spirituality, Marian theology, nutrition and Biblical nutrition. He has written some articles and in a journal study and produced several DVD’s. See the section on books for a bio on his book writings and other accomplishments.

Jim and Fr. Bill McCarthy produced a 16-part Christianity … Simplified
book series; at My Father’s House retreat center in Moodus, CT. They started
a charismatic prayer group in 2017. Jim developed the prayer group into a Franciscan secular group the; Order of Eden Franciscans (OEF) in 2018 which had 11 professed in 2019. Jim was professed as a Secular Franciscan Order (SFO) in 1982 at the Franciscan University of Steubenville, OH.

The Order of Eden Franciscans (OEF) emphasizes the Franciscans and the Carmelites and several Saints like St. Francis of Assisi, St. Francis of Paolo, St. Padre Pio, St. Therese of Lisieux, St. John of the Cross, St. Benedict and St. Bruno. They teach purification: personally, and for the environment; by teaching how to juice fast, be Christian kosher and about a lifestyle for health and healing from illnesses and degenerative diseases. They gather monthly and use social media and they are a not-for-profit ministry and community; supporting the Arts and the Church; as they seek to grow in holiness in the OEF lifestyle together. 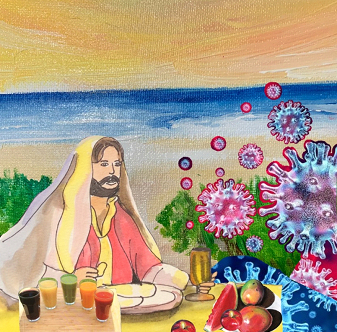