I. A Problem: Global Warming and Depletion
Introduction

B. Scientific and Behavior Solutions
22. Two Approaches: Technology or Behavior
23. Radically Changing Our Behavior
24. Transportation and Industrial Sector Solutions
25. Agriculture sector involves Food Choices
26. Question of Behavior Change and Sacrifice
27. Protein Needs for Humans
28. The Garden of Eden as a Model!
II. A Spiritual Solution to the Problem:

C. Biblical and Early Church Evidence
29. Those seeking the Culture of Life
30. A Kosher (pure) Vegetarian Diet
31. A Toxicology Study on the Torah
32. The Kings Delicacies
33. Three Altars of the Lord
34. Mary the New Eve
35. Mary the Kosher Woman
36. Jesus the Vegetarian Messiah
37. Jesus was a Physician
38. Philo and Josephus on the Essenes
39. Christianity a Continuation of the Essenes
40. The Kosher Essene Jerusalem Community
41. The Essenes of the Qumran Scrolls
42. The Essenes Eschewed the Flesh of Animals
43. Contemporaries on the Early Christians
44. The First Jewish-Christian Communities
45. Nazarenes as Vegetarians
46. James the Second Pope was Vegetarian
47. Fasting in the Church Fathers and Scriptures
48. Preserving the Earth, a Rabbi
49. Healing Addictions and Diseases
50. Religious Emphasize a Plant-based Diet
D. Theology on Climate Change
51. The Ecological Crisis (Bishops, Pope)
52. The Vatican on Climate Change
53. Vatican Releases Climate Change Report
54. The Addition Needed with Laudato Si
55. Catholic Institutions shift to 3x/week
56 Christian Kosher for the Planet and Health
57. Global Containment of Births?
58. The Vatican 3 feet underwater!
59. An Encyclical asking the Question
60. Mary, the Untier of Knots (Pope Francis)
61. Triumph of the Immaculate Heart

Most people do not realize how serious this global warming situation really is in the long term. This crisis is the most serious crisis that the Catholic Church and everyone on planet Earth have ever faced.

At the Vatican the Pontifical Academy of Sciences chancellor, Msgr. Sanchez Sorondo, PhD (now a bishop) says that the question of how to feed “everyone” without sacrificing our remaining carbon-absorbing forest is what the Pontifical Academy of Sciences has been charged to solve. That is exactly one of the issues this document is all about: the vast destruction of the rainforest and other forests are primarily due to raising cattle and growing feed to feed the cattle. Several of the scientific sections go into this problem and the only real solution is to switch from a meat-based to a plant-based diet. It is impossible to deal with global warming and global depletion, both part of Climate Change, unless livestock are reduced drastically and people switch to a plant-based diet.

This book was written in 2014, then in 2015 Pope Francis came out with his Encyclical on Climate Change and visited American in October giving several talks on Climate Change, a few comments on these have been added in this revised edition along with other changes.

Most of the experts have said that wars will come from climate change and wars already have started. In the heat wave of 2010, the Russian government placed an embargo on grain exports, which caused chaos in the commodities markets, an unprecedented food price spike, and, consequently, food riots across Asia and Africa – unrest that led to the violence of what we now refer to as the “Arab Spring.” More wars will come as climate change grows.

The size of the world’s population in 2015 (over 7 billion) isn’t the real problem, even though it is a serious long-term problem. The real problem presently is the choices that people are making, and choices that corporations and governments are making. People are choosing to eat animals (70 billion every year). This is carbon footprint which is at least 30% GHG and along with other poor (junk food) food choices is upwards of at least 30% of the problem and possibly over 50% of the problem. The choice for a person to eat meat and animal products for a whole year has larger green-house gas emissions, then all their transportation uses (cars, buses, airlines) put together for that year.

Climate change can be changed in only two ways; the first are the various options of technology, none of which can stop or even slow down global warming and would take decades and trillions of dollars to implement. The other option is radical behavior change, since the minor behavior changes that have been made over the last 20 years are not even making a dent.

The first section is a summary of the quantitative research and data which is measured and well-balanced. Those who disbelieve and deny global warming are usually cherry picking the data to suit their views and not looking at the all the various types of research and its data over the decades and centuries that scientists are looking at.

The one thing that everyone has in common and can change is their diet. Even if all the people on earth cut out all animal products and junk food products four days a week (cutting their animal product intake in half) and only ate these three days a week that is essentially cutting global warming by 25% which is a very large figure. This is a good place to start and it doesn’t cost anything!

This kind of behavior choice needs a model respected by all to follow, to look up to, and even to pray for guidance too; Jesus and Mary were Kosher Vegetarians. There is a relationship that can be established in everyone who becomes a vegetarian with the Jesus Christ and the Virgin Mary through foods and fasting. They are models for this Climate Change problem! Jim Tibbetts other books on biblical nutrition, fasting, and Jesus and Mary as vegetarians go into the theological and scriptural evidence in more detail, some of the key points are mentioned in this book.

Many people (not just Catholics) view the Pope as the leader of the free world. The Holy Father and his Church have a moral responsibility to guide and advise people about their behaviors and choices; especially ones that have serious moral and ethical consequences. Global Warming is all about people’s choices and group (corporations and governments) choices. It will take decades to implement behavior, industrial and governmental changes.
Radical behavior change is needed in order to change both Global Warming and Global Depletion.

Thank you for taking the time to read this document.
We hope that it was an inspiration to you. 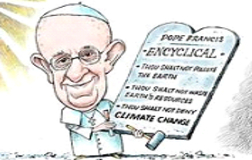